Sustainable tourism to restore the economy and slow down climate change

Before the Covid-19 Crisis tourism received a lot of critic. Many people think that it isn’t ethical to travel for fun, while our carbon footprint might cause the temperature on earth to rise with dangerous consequences. Especially flying as a leisure activity is heavily criticized. So what options does the environmentally concerned tourist have to enjoy a sustainable vacation? Is sustainable tourism possible, or is the only responsible action to restrict holidays to places that can be reached by foot, bike, or sailing boat? But what consequences will this have on our society? What if the overall benefits of tourism are bigger than the negative effects it has on our climate?

Less international tourism would deprive many developing countries of the economic and environmental benefits of tourism. Global reports from April and May 2020 show a strong increase in poaching, deforestation, and illegal mining in the (tropical) forests around the world. This is partly due to a lack of control, but also because of the local economic situations. When world economic activity goes down, this often first affects the livelihoods of the poor. Poaching, logging, farming and mining offer them a way to make a living, or simply just to survive.

The CO2 emission from transport can be recaptured from the air again. “But when a species goes extinct, it’s gone forever. Losing species isn’t just deeply sad, it’s also dangerous. It’s like throwing bits of an airplane out the window mid-flight – we don’t know what species are crucial parts of a functioning ecosystem”, explains Dr. Laura Kehoe from the University of Oxford. Therefore we might have to accept a limited emission of greenhouse gases to prevent major damage to natural areas that inhabit endangered species of flora and fauna.

Why do we travel?

When a journalist asked Neil Armstrong what would be the philosophical reason why humans want to go to the moon, Armstrong answered:
“I think we’re going to the moon, because it’s in the nature of the human being to face challenges. It’s by the nature of his deep inner soul. We’re required to do these things just as salmon swim upstream”.
I believe Armstrong was right, that it’s in our nature to find solutions for challenges and to explore the world and beyond. And this is how it should be, at least from an evolutionary perspective, according to psychologists like Martin Seligman. Among our earliest ancestors, those who were perfectly content with what they had may have been left in the dust. Unhappy with the present and dreams of the future are what keep us motivated. Likely, perpetual bliss would completely undermine our will to accomplish anything at all. Like those people who smoked too much marijuana and are perfectly happy lying on the sofa doing nothing. 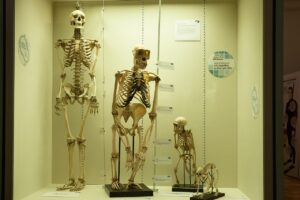 Of all the many human species that have evolved, only ours has survived to the present day. Our complex culture has been a big part of our ability to outcompete the other species. Mixing with other species could have helped us develop that culture. When our ancestors met other species, they may have shared knowledge as well as genes. Learning new habits and tricks from other species could have helped spur on our development. “The things we think of as creativity could be the result of interaction between different groups,” says Ackermann. As a species we have evolved to be good at copying, learning, and innovation, says Simon Underdown of Oxford Brookes University in the UK. These are traits that primed us to become the cultural beings we are today.

Even though the tourist industry is massive and widely spread over other industries, it is estimated that in 2019 it only contributed to around 8% of all global greenhouse gas emission. Although this number is expected to grow again after the Corona Crisis, I’d like to offer some perspective.
Take the dirty secrets from the fashion industry. Its estimated global Gross Domestic Product (GDP) market value is only 2% (compared to 10.4% from tourism) but the fashion industry contributes to 10% of all humanity’s carbon emission! A study published in Business Insider in 2019 even shows that the fashion industry is the second-largest consumer (after agriculture) of the world’s freshwater supply. It pollutes the oceans with microplastics and on top, there is the huge contamination from landfills and the burning of fashion products that couldn’t be sold.

And what do you think about your smartphone. Already 3.5 billion people have one. And some people even more than one. The average smartphone contains small amounts of copper, aluminum, gold, silver, platinum, and palladium. Mining these metals from ore can be arduous; it takes a ton of ore to get 1g of gold. But that isn’t all. Your phone also contains many rare earth elements which have to be mined from the earth’s crust. On top, the data from your phone is stored on many servers around the world which need to be kept cool 24/7.

If we look at the five Shared Socio-economic Pathways from the International Panel on Climate Change (IPCC) then the first Shared Social pathway (SSP 1) will have the best outcome for our climate. This Socio-economic Pathway is based on less poverty and a more equal society. Tourism provides a very good tool to spread wealth more equally around the planet. In fact on June 10, 2020, the United Nations World Travel Organization wrote:
“Tourism can be a platform for overcoming the crisis after the pandemic. By bringing people together, tourism can promote solidarity and trust – crucial ingredients in advancing the global cooperation that is so urgently needed at this time.” 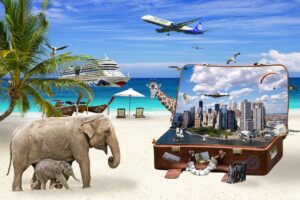 A country’s economy is broadly divided into three major sectors. These include the primary sector, which transforms natural resources into primary products and the secondary sector which creates finished products that are used by the end consumer. The tertiary sector, also called the service sector, does not produce products, rather it delivers intangible goods. Tourism is part of this tertiary sector. In the twentieth century the service sector has grown due to improved labor productivity and higher disposable income. More disposable income enables more spending on luxury service items. This includes eating out in restaurants, sleeping in hotels, and traveling. Although tourism mainly belongs to the tertiary development sector, it also influences the first two sectors. This makes tourism a very important economical tool for environmental advantages. With tourism a country’s economy is less dependent on its natural resources.

Tourism compares favorably with other economic activities as a generator of employment and income, both directly and diffused through the economy. The Income Distribution Effect (IDE) also offers one of the strongest socioeconomic arguments in favor of tourism-related development. It describes how income generated by the sector is distributed. The analysis can be undertaken at a geographical and at a functional level. At the geographical level, tourists prefer to travel in regions with little industrial development. They also tend to gravitate toward areas of little agricultural value. For these reasons, tourism can become a dynamic force in regional economies.

Within a country, tourism demand originates in urban concentrations where the highest incomes are found. A percentage of such incomes is normally set aside for tourism in areas that are geographically different from the visitors’ home base, reinforcing the process of internal income redistribution. Internationally, a portion of the tourism consumption by developed countries occurs in developing countries, favoring the process of international income redistribution. At the functional level, the income generated tends to favor employment. This is estimated to contribute more to the total value-added of the industry than other factors do because much of tourism involves personal services. As estimated by the United Nations World Tourist Organization, worldwide tourism, directly and indirectly, supports at least 319 million jobs, representing one in ten of all jobs globally! These jobs include hotel managers and staff, taxi drivers, pilots, tour operators, restaurant owners, and shop attendants, among others. Secondary employment is generated in agriculture, industry, handicrafts, and services.

For several developing countries tourism has become the most important economic activity, especially as the major earner of foreign exchange. Recent (April 2020) research from Esta shows that worldwide the economy of Bangladesh depends the most on tourism, with as many as 944 jobs depending on every 100 tourists visiting the country!

So how do we travel more sustainable? Besides walking, biking and sailing it will already help if we travel more consciously. Since most fuel is used for taking off, it isn’t very sustainable if you fly each month for short city/ shopping trips. It is for instance better for the environment and the global economy if you travel once a year back and forth to a developing country. Stay there a few weeks, travel with public transport when possible and try to spend your money with local businesses. For your flight, try to travel with modern commercial airplanes, as they are more fuel efficient and also try to avoid stopovers. 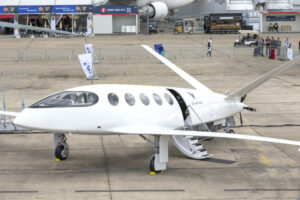 If you want to travel more than once, you can consider traveling those other times by bike, sailing boat, electric car, bus and/ or train. In the near future we will also be able to fly with electric airplanes. Still, even when using electric transport, it is important verify where their electricity comes from. Currently most electricity continues to come from conventional power plants, which also produce their carbon footprint.

If you want to mitigate your carbon footprint from traveling you can invest is so called carbon-offset programs. Several airlines and tour operators use carbon-offset calculators, but most of those aren’t accurate and are mainly used for the purpose of positive publicity. Carbon-offset calculators are used to calculate the amount of greenhouse gas that’s released when flying a certain distance. They often don’t include the type of plane, the age, or how many people were on it. Besides that, they underestimate the costs of planting and taking care of young trees.
Say that you fly from Amsterdam to New York on a direct flight. According to a carbon footprint calculator, a direct flight from Amsterdam to New York produces 0.81 tons of CO2 emission in Economic Class. Using the CO2 absorption calculation from Medcrave, this means you will have to plant 0.81/ 0.01915 is 43 Calliandra trees to offset your carbon footprint, right? Well, more or less. Even if those trees are planted directly it will still take them at least a year to offset your carbon footprint. And this is only when all of those young trees survive.
According to the carbon offset website, it will cost you only 6.45 US$ to have these 43 trees planted and looked after. Using the maintenances prices from Teagasc, an Agriculture, and Food Development Autority, it will cost 3.80 US$ per tree to plant and look after it for a year. A more realistic price for planting 43 trees and looking for one year after those will then be 43 times 3.80 US$, which is around 163 US$.

If you want to mitigate your carbon footprint from flying and other means of transport, it’s best to do your own research and invest directly into one of the several sustainable carbon-offset programs. Remember don’t be too frugal as the health of our climate and planet is worth some extra care taking.

More tips about sustainable traveling and the relation between tourism and our environment you can find in the book Tourism vs Climate Change and on our website: www.tourismvsclimatechange.org