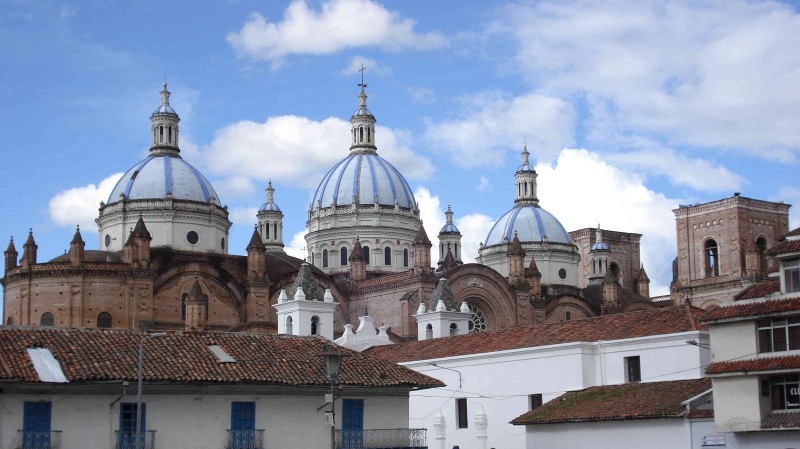 Ecuador – Highlights include: Galapagos, the Equator, local traditions, the Amazon and the Andean Mountain range with 7 mountains and volcano’s higher than 5000 m.
Official Name: Republica de Ecuador
Area: 256.370 KM2 (about 7x the size of the Netherlands)
Amount of inhabitants: 16.6 million (2017)
Capital: Quito
Form of Government: Democratic
President: Lenín Moreno (2017)
Language: The official main language is Spanish, but regional the indigenous Kichwa and Shuar are also accepted as official languages in Ecuador.
Currency: US Dollars
Religion: Freedom of religion, but Catholic is the dominant religion

Five Fun things to do in Ecuador, by Jules T.

Geography
Straddling the equator in western South America, Ecuador has territories in both the Northern and the Southern hemispheres. It borders Colombia to the north and shares a border Peru to the south and to the east. The Pacific Ocean is Ecuador’s western border. Ecuador, 256,370 square kilometers in size, is geographically divided into four regions (the Amazon, the Highlands, the Coast, and the Galapagos Islands) and is politically split into 22 provinces, which, in turn, are split into 205 cantons.

The Coast
Ecuador’s coastal region (a.k.a. the western lowlands) is made up of fertile plains, rolling hills, and sedimentary basins traversed by a plethora of rivers that rush from the heights of the Andes to the Pacific Ocean. All five coastal provinces, encompassing 640 kilometers of coastline between them, have attractive beaches and plenty of hotels and resorts for tourists. Crisscrossed by an expansive network of rivers and home to the nation’s most spectacular beaches, the provinces of Esmeraldas, Manabí, and Guayas are quite impressive destinations and frequented by tourists from all over the world. Geographically speaking, much of this area is part of the Guayas River Basin, which has at least twelve major tributaries located primarily near the communities of Daule, Babahoyo, Macul, Puca, Paján, and Colimes.

The Highlands/ Mountains
The Andean Mountain Range crosses the country from north to south. The Occidental and the Oriental Ranges are born from this mountain system as it divides in the province of Loja, forming plains and valleys along the Andean Corridor. Tip: a good place to stay in Loja/ Vilcabamba is Hosteria Izhcayluma.
Between the two ranges there is a plateau which reaches heights of three thousand meters. The Highlands Regions, commonly referred to as La Sierra, is made up of ten provinces, each of which have important peaks such as Chimborazo, the Illinizas, Cotopaxi, Cayambe, and Antisana.

The highest peaks are found in central and northern Ecuador. From Riobamba towards the south there is a decrease in altitude and an increase in the width of the mountain range, forming a kind of plateau known as the Austro.

The Amazon Rainforest
The Amazon Region and its five provinces can be geographically divided into two sub regions: the High Amazon and the Amazon Lowlands. The Highlands is comprised of the Andean foothills which slowly descend towards the Amazon River Basin. Here, you’ll find the Napo, Galeras, Cutucú, and Cóndor ranges. The most impressive elevated regions of this area are in the north and include Volcano Sumaco. The Lowlands, found further to east, are home to some of the nation’s most beautiful and important rivers: the Putumayo, the Napo, and the Pastaza.

Check out our standard tours in Ecuador.