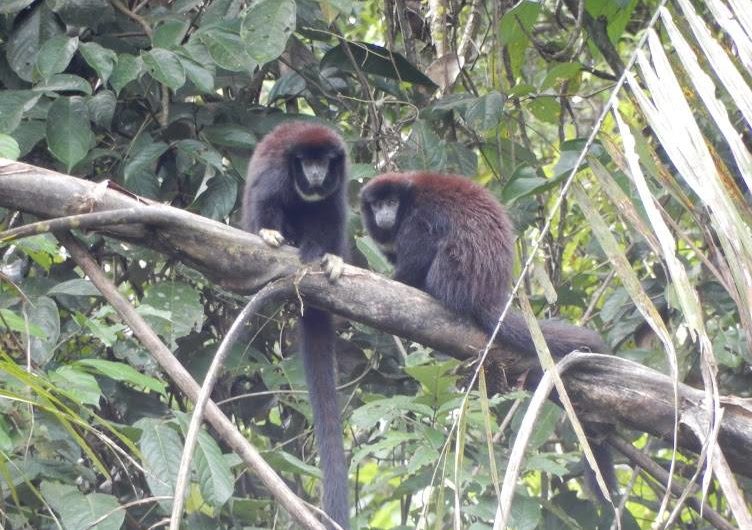 A Comparison between the Manu, Tambopata, Iquitos, Madidi and Cuyabeno Amazon Reserves

It is difficult to describe exact what the differences are between these nature Reserves in Peru, Bolivia and Ecuador. The nature is very diverse and never the same and impressions can be different depending on weather, season, month, day or even seconds between spotting or not spotting that jaguar that just crossed the river bank.
At a recent survey in October 2011 done with the support of National Geographic they discovered 19 different jaguars in the Madidi reserve!

All National Reserves or Parks have in common that they are home to many different mammal species, including different monkey species, cats, capybara’s and more. There live many reptiles species, even more different bird species and countless amounts of insects and plant species.
The Reserves also have in common that they are all in danger because of its industrial value. Some of the threats include: oil winning, mining, wood logging, farming, or even hydro electric dams. However scientists and nature groups continue their efforts in trying to protecting these areas, the strongest ‘tool’ that these Reserves have is sustainable tourism. Tourism supplies the areas with an alternative income and tourism makes the world more aware of its beauty and vulnerability. If you like nature it is almost a must to visit at least ones in your live The Amazon Jungle!

The general differences for visitors:
Keep in mind that your experiences will also depend on which parts and how deep you enter the Reserves.
The comparison we made below is based on facts, generally visited areas, available pictures and some eyewitnesses. Below that we also added a link where you can find a list with general facts and comments about the different Nature Reserves.

We start with the difference between visithing Manu and Tambopata, because of the big price differences there are often questions about this.
In general the price differences are caused, because the Manu Biosphere Reserve is far less accessible.
Because the tours through Manu often already start in the sierra at more than 4000 m above sea level and go down through the cloud forest, until the tropical jungle they cover more altitude differences and therefore more biodiversity.
In the Manu National Park it is therefore more likely to see a bigger variation in plants, insects, birds (like Cock of the rock) and other animal species than in Tambopata, Madidi or Cuyabeno.
That Manu is less accessible to humans, make the changes to see shy animals like the Jaguar slightly bigger. However there are also regular reports of people who have seen jaguars in Tambopata, Madidi and the Cuyabeno National Reserve.
Tours in Tambopata, Madidi and Cuyabeno offer in general less cloud forest, altitude differences and biodiversity to discover.

Amazon, Iquitos – Pacaya Samiria National Reserve
The Amazon river is 6,470 km (4,020 miles) long and the world’s longest and largest river. It is the creator of life, illusions and legends, and discovered by Francisco de Orellana in 1541. Iquitos is the biggest Peruvian city in this Amazon basin.

The waters around Iquitos are know for the great possibility of seeing the pink/ white sweet water dolphin, the grey dolphin and the enormous Victoria water lilies.

The Pacaya Samiria National Reserve in the Amazon Basin is known for being home to several threatened or endangered species including: the jaguar (Felix oca), the black alligator (Melanosuchus niger), the giant river otter (Pteronura brasiliensis), the manati (Trichechus inunquis), four different species of primates and the endangered “charapa” and “taricaya” aquatic turtles.

The Cuyabeno reserve in Ecuador consists of a system of several fresh water lakes (more fish species). In general it is less likely to see a group of macaws, or a Jaguar than in Manu o Madidi, but here you have a bigger possibility to see the pink fresh water dolphins, an ocelot and even the Harpy Eagle! The Cuyabeno area is also less touristy than most Peruvian and Bolivian lodges close to Rurrenabaque. Something else that could be useful to know is that the  raining season from March to August is different from the Peruvian and Bolivian one.

Although there are off course exceptions, in general it can be said that the services and guide in both Peruvian and Ecuadorian Reserves are better, more informed and more experienced if it comes to dealing with tourists. The knowledge about the local surroundings, plants, animals and also the quality of spotting animals depend a lot on the personal interest of the guide himself.

Although it is never a guaranty in general it can be said that the less visited areas, more exclusive locations and better services are in general more expensive. This said, we can also say that each Amazonian area or Reserve that you visit is unique with its own flora and fauna and each visit is a great experience.

Because it is still nature, the amount of animals you can spot in the different Reserves and lodges, will depend a lot on the weather, the area you visit, your guide, your own skills in observation and not to be underestimated luck. Some scientist can spend weeks without seeing a jaguar, while there are known cases (in 2011 in Madidi) about tourists that spotted a jaguar and even captured in a great picture!

Cuyabeno Reserve: raining season from March to August. The dry season here means that the Reserve is less accessible, but if you do get in, it is easier to spot the animals around the much smaller available water reserves. It is also breeding season for most birds in the dry season.

Tambopata Reserve: raining season from November to April (wettest month in Februari). Dry season from May to October. From July to September is the best season to observe macaws.

Manu Biosphere: most of the rain falls from the end of November through beginning of April. The dry months of the year are from June to September.

Iquitos and Pacaya Samiria Reserve: Between October and April.

Madidi National Park: is located in the southern hemisphere and so the cold season (autumn and winter) go from May to September and the hot seasons (spring and summer) from October to April, it’s also considered the rainy season. Warmest month November, wettest month January.

For more detailed information you can visit our webpage with a big selection of general facts and comments about the different Nature Reserves: Amazon Jungle Information

We hope that our information above has been helpful to you and that you you now have a better impression of which tour you would like to book. Please feel free to ask us any questions you might still have.