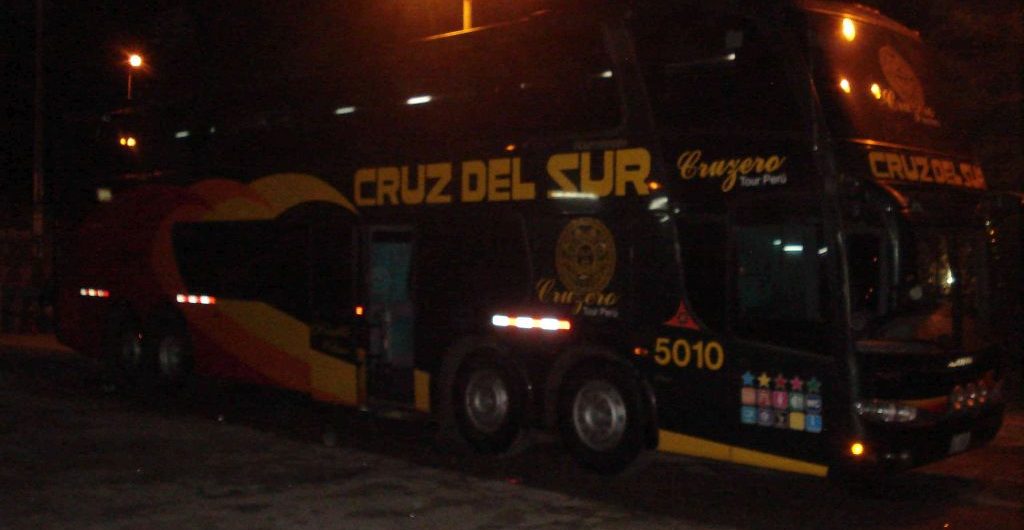 When you look online about the safety of traveling in Peru I am sure you will find several horror stories about terrible bus accidents. Reading about these accidents and reading blogs from travelers who want to gain more followers (bad news still attract more attention) almost make you want to avoid traveling by bus in Peru. On top, even the Dutch government (and likely other governments around the world) likes to take as less responsibility as possible. Therefore they state that there are many bus accidents in Peru and recommends travelers not to travel overnight.
So if the government says that traveling by public bus in Peru isn’t safe, then this must be true, no?
Unfortunately, or maybe I should say fortunately, the Dutch government and most blog writers are wrong and I will show you why. At least when we talk about the long distance buses, as I will be able to show you the official statistics about their accidents.
Since Peru is a huge country and it takes hours and hours to travel between the bigger cities, the overnight buses in Peru are very popular among Peruvians. Even people with a car prefer to travel 500 km while sleeping in a comfortable bus, instead of having to drive in a small car.

How safe are Peruvian bus companies?

First of all, talking about reliability of governmental websites, the official website from the Dutch government is already wrong with naming Ormeño as one of the three safest bus companies in Peru. This might have been alright 10/ 15 years ago, but now many of their buses are (too) old and their service is going down.

More than 95% of the long distance busses in Peru are modern buses built by the following three international companies: Scania, Mercedes Benz and Volvo. The better long distance bus companies try to replace their buses after 3 to 5 years.
Bus drivers in Peru are well trained, with many even following driver courses organized by Scania and Volvo Peru. The special driver licenses (A-llla) which give you permission to drive one of the big long distance busses (Omnibuses) are only valid for 3 years.
The better bus companies follow strict regulations which their drivers have to follow.
Some of the best long distance bus companies nowadays include: Cruz del Sur Bus, Ittsa Bus, Oltursa, Linea, Emtrafesa and Movil Tours. Other good bus companies that are quickly improving include Civa and Tepsa and more.
From Cruz del Sur Bus I know that they even requests its drivers to participate annually in health and driver tests.
The amounts of stops these bus companies make during their journey depend on how much you’re willing to pay. When you buy the cheapest ticket from Linea its bus will make many stops along the way. If you buy a more expensive direct ticket there will be fewer stops. Still none of the bus companies mentioned above randomly pick up passengers along the road. In fact before you’re allowed to enter these buses you have to show you’re ID, pass a metal detector and your hand luggage will be checked. Most long distance bus companies even film their passengers. If passengers don’t behave their pictures will be printed and they will be denied to travel in the future with that company.

By Peruvian law bus drivers are not allowed to drive for more than 4h30 min. without a rest. This means that most public bus companies travel with two bus drivers who take turns. This in contrast with many tourist bus companies which still travel with only one driver to save costs and lower their prices in tourism.

Both public and private buses in Peru are not allowed to drive faster than 90 km/h except for max 3 minutes when they might have to pass a slower vehicle.
The bus companies mentioned earlier and most other Peruvian bus companies who take themselves serious have a tachograph to monitor the behavior of their drivers.
The better companies like Oltursa and Cruz del Sur Bus even monitor all of their busses in real time by satellite! This way they know almost instantly if their drivers drive too fast or stop somewhere where they’re not allowed.
In 2014 Cruz del Sur bus was the first Peruvian and one of the first Latin American bus companies to receive an international ISO 39001 https://www.iso.org/standard/44958.html certificate of safety.

According to the following governmental website of CNSV, who is in charge of the safety in Peru a total of 2826 people died from a traffic accident in Peru. Most accidents happened in the cities, while 772 people died from traffic accidents outside of the cities.
From these 772 deaths ‘only’ 114 people died from an accident with one of the 50 ‘most dangerous’ bus companies in Peru. Peru has a population of just over 32 million inhabitants. This means that 1 out of each 11324 inhabitants died from a traffic accident.
You can verify this information for yourself on the following websites:
This is the website of Sutran, a governmental organization in charge of improving the safety on the Peruvian roads.
These are the statistics of bus accidents in 2017.

Is it safer to travel in the Netherlands or in Peru?
Yes, if you only look at deaths from general traffic accidents, then it is safer to travel in the Netherlands. But depending how you look at the statistics above you could argue that it is still much safer to travel with a long distance bus in Peru than to participate in Dutch traffic. Even if you travelled in 2017 in one of the 50 most dangerous bus companies in Peru the chance to die in an accident was only 1 : 280702, which is ten times safer than participating in Dutch traffic…
If you want to improve your safety in Peru, you should actually try to avoid traveling in the cities (Lima counted 539 casualties in 2017!) instead of through the country side…

And what about traveling in the USA?
The USA has 325.7 million inhabitants and according to the following report in 2017 a total of 37133 died from motorized traffic accidents, which equals 1 in each 8772 inhabitants. This means that it is safer to travel in Peru than in the USA.

From personal experience the more expensive bus companies in Peru offer the best service I’ve experienced in Latin America, the USA and the Netherlands. Not only can you travel in a seat/ bed at 180 degrees with a blanket and pillow, you also have your own music, film and internet console, there is constant personal assistance on board, you can order coffee, thee, water, soft drink and even vegetarian food. Some bus companies offer magazines to read, or even organize a game of bingo. But that’s not all. Most inter provincial bus companies depart from their own organized bus terminals and the better companies have organized and relative safe bus terminals. On top, the buses are punctual and if something un-expected happens, they try to look for the best solution for client and company.

I could finish my information here and try to picture an amazing image of public transport in Peru, but that would also not be fair. Over 15 years of experience of traveling in Peru has taught me that unfortunately not all bus companies and drivers follow the law and some busses still drive too fast or even reckless.
Peru is also a huge country where many roads go through the mountains with steep cliffs and unpredictable weather and geographical conditions like landslides.
Even on a flat and straight road it is possible that a truck driver on the other lane and hits your bus. The worst Peruvian bus accident of 2018 was also caused by a truck driver in combination with a steep cliff and limited visibility…

Another safety issue is about bus robberies. Unfortunately it is impossible to find solid information about this problem. I know it still happens, but bus companies are careful not to go public with this information if they don’t have to. Although guns are used to scare the people during these robberies, luckily most of the time no-one is harmed as long as the robbers get what they want. It is also less likely to get robbed while traveling with one of the direct bus companies with satellite control than if you travel with a cheap bus company which stops everywhere. Cueva Bus between Lima and Arequipa used to have a bad name. Although there must be other companies that got robbed here, I’ve never heard about it. The cheap Soyus/ Peru Bus company between Lima and Nasca does provide its passengers with a warning to look careful after their belongings. This bus company picks people up at random places along the Panamericano road and is popular with pickpockers. The same can be said about the crowded city busses in Lima. Lima also used to have a problem with frequent robberies of tourist buses between the airport and Miraflores. The first few years when I worked as a tour leader in Peru (starting from 2005) I had to tell my clients to keep the curtains in the bus closed for the first part of the trip. This was while driving through a poor and quiet part of the city. The last years however it seems that there are way less robberies, possibly because traffic in Lima became much busier.
It doesn’t happen very often, but I do know that over the year’s buses from several companies, even Cruz del Sur have been robbed along different routes in the countryside of Peru. Most ‘frequent’ robberies were between Ica and Cusco and between Cusco and Puerto Maldonado in the Amazon.
Does this mean that these roads are dangerous to travel by bus, knowing that each night dozens of buses travel these roads and only ones in a while one of them get stopped?

When traveling in Peru it is always important to try to stay informed about the road and weather conditions and about local political situations, including strikes and road blocks.
Personally I traveled more than hundredth times with different overnight buses along different routes, even between Ica and Cusco. I’ve been in road blocks, or hold ups by landslides, but never experienced any accident or robbery.
When traveling as a tourist I would recommend you not to use the crowded city buses in Lima and try to avoid the small combi buses. For traveling long distances it is well worth choosing your bus company wisely. Especially when you travel overnight it is worth to pay only 5 to 10 US$ extra to travel safer and more comfortable.
An extra advantage of the better bus companies is that they try to take well care of you even when the bus gets stuck on the road because of a landslide or road block. In those situations you don’t want to sit in a bus where the toilet doesn’t work and which doesn’t have airco or heating…

Now you’re here, would you like to see our special selection with tours to Machu Picchu.